Review of “Inheritance” by The Headless Critic

Production by: Portola Pictures
in association with: Other Brother 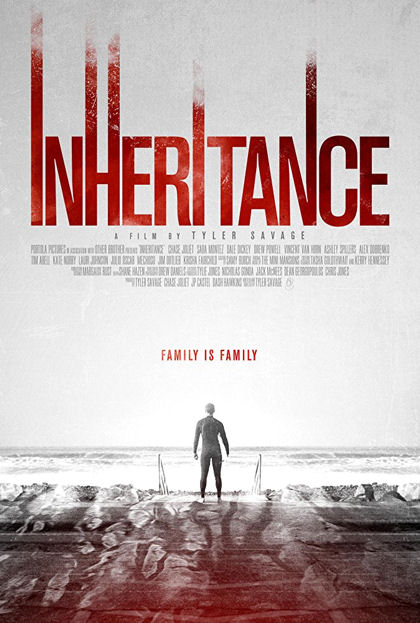 Family man Ryan Bowman (Chase Joliet) just got the normally horrible news of his father’s passing. The thing is Ryan thought the biological father he’d never met had been dead for years. At his absentee father’s death announcement, Ryan finds out of his Inheritance of a two million dollar, seaside home. The financially struggling family may have just had their prayers answered in death or so it first seems. Ryan and his pregnant wife Isi (Sara Montez) travel to their new home only to find they inherited far more than a house. Dark family secrets unveil a maddening of the mind. Every blessing comes with a price to pay.

First time feature writer and director Tyler Savage brings us a Shining worthy tale of a struggling family settling into a new property with a violent past that comes back to haunt them. A husband and father’s descent into madness is the key focus of the film and it’s done well but the true intrigue of Inheritance is the feature we didn’t see. A past told in pictures. Perhaps it’s only because it was only glimpsed upon that make you want more but if so it is successful.

For a first feature, filming is near studio perfect with beautiful oceanic cinematography. Savage creates suspense in the unknown capturing a dark eerie feel. A to C storytelling does lose focus at step B which helps the suspense but will not please a generally linear viewing audience. Chase Joliet’s descent and Sara Montez’s bipartisan role play well off each other. The real intrigue is in side characters and smaller roles like the unexplained digger Del Morse (Drew Powell) and the Morse family history with a dual generation of characters in alluring performances from Tim Abell as Frank Morse and Jim Carpenter as Henry Morse. Perhaps a fulfilling prequel is a possible second feature.