Review of "Hellraiser" by The Headless Critic 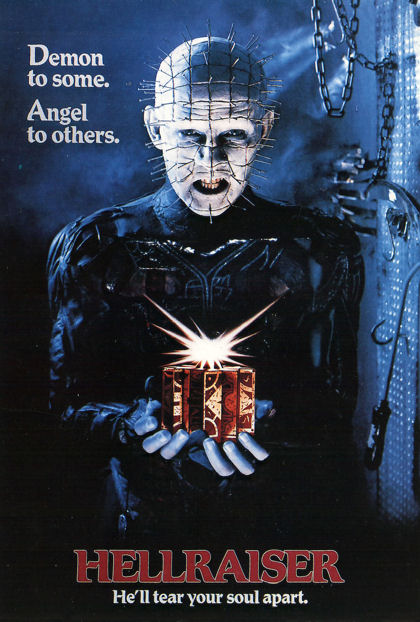 “We have such sights to show you.” A married couple Larry (Andrew Robinson) and Julia (Clare Higgins) move into a new home hoping to reinvigorate their struggling marriage. Something’s hiding in the attic though. Having lost his human body to other worldly creatures of torture and solace known as cenobites, Julia’s lover and her husband Larry’s brother Frank (Sean Chapman & Oliver Smith) is brought back into existence by his brother’s blood. Frank convinces his sister-in-law lover to bring people to the attic for sacrifice so he can regain his complete human form. Escaping from hell didn’t go unnoticed though. The sadomasochistic underworld has sent three cenobites to retrieve what’s rightfully theirs. “Demon to some, Angel to others” “it will tear your soul apart.”

Hellraiser may be the greatest horror concept that never quite meet the potential it has. As the tagline says, “There are no limits” where the concept can go. The Cenobites are amazing. The inter-dimensional characters essentially from hell are intriguing from Pinhead to the unnamed female Cenobite and everyone in-between. Torture for punishment opens doors to a world of horror to be discovered. Some of the visuals in Hellraiser are the most frightening images you’ll see on film. Growing up there were only three films I wasn’t allowed to watch until I was a teenager, The Exorcist, The Texas Chain Saw Massacre and Hellraiser. It’s that scary, that scarring, that terrifying for parent and child alike.