Review of "Unfriended: Dark Web" by The Headless Critic 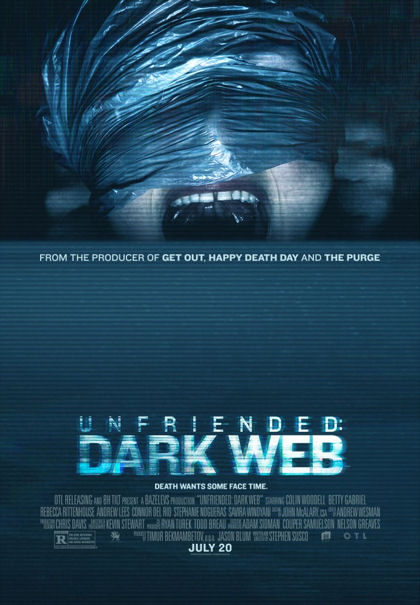 It’s game night for Matias (Colin Woodell) and his friends who’ve all Skyped in to play. The game they’re playing tonight is a lot more serious than the Cards Against Humanity they got online for. Matias “found” and new laptop and the owner wants it back. The data stored on the mac leads the group to the dark side of the internet putting all of their lives in danger. As the group begins dying off one by one, they must figure out how to stop this evil game that’s being played before they’re all dead. They’re watching everything you do, seeing everything you type and they know where you are. Forget being Unfriended, we’re about to go Dark Web.

Though several similarly themed movies have been made in-between, this case of unfriending is first official sequel to 2014’s Unfriended. They are as different as if it were made by someone else with nothing to do with the original movie besides a similar theme. Oh wait, it is. New director Stephen Susco who also wrote the film is best known for his writing contributions on The Grudge and Texas Chainsaw 3D. This is his first directorial effort.

Made for a measly million dollar budget, Dark Web is shot similarly to 2014’s Open Windows with the story playing out completely through laptop and phone screens. The concept is solid, the style is modern, the performances are at times downright impressive. Colin Woodell and Rebecca Rittenhouse’s ability to cry on queue is particularly worthy of mentioning.

After a thirty minute introduction to our group of characters that’s basically like watching a friend play on their new laptop, the story finally starts going dark. As our Skyped in characters discover the dark net, some of the videos they find there are more interesting to explore than the movie itself. As the dark net discovers them, the scrambling of killers on camera, the tidiness of how everything is pulled off just perfect and the lack of importance of the deaths of characters just makes me not care about the outcome. The largest deterrent in the movie though is that the bad guys sense of control and winning is so overwhelming it doesn’t even make you want to play. While I see a lot of potential in Dark Web, overall this one just barely gets Unfriended.