Review of "A.I. Tales" by The Headless Critic 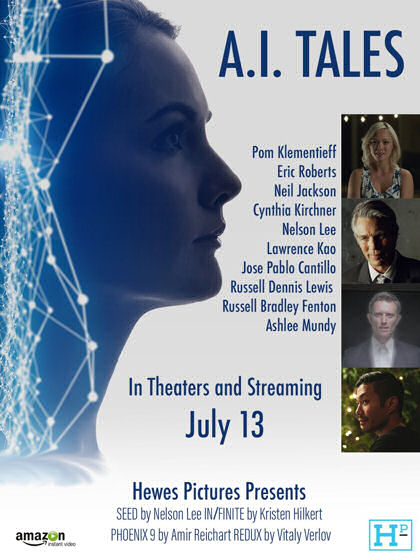 There are so many short films out there that don’t have a proper platform to find an audience. A.I. Tales brings us an anthology of four of the best sci-fi short films you haven’t seen from the last four years.

Today is Nathan’s (Nelson Lee) last birthday. The future is now and it’s overcrowded. Years ago China tried to control their population by limiting the number of children people could have through forced abortion. The world frowned upon their ways and offered solace to those who fled. China was right. In order to keep the world’s resources from depletion, its citizens are asked to end their own lives on their fortieth birthday.


IN/FINITE - 2017
Production by: On The Plane Productions

Her entire life Jane (Ashlee Mundy) has been pulled towards a greater purpose. Her purpose is realized when she’s accepted to Mars One, a mission of a lifetime. To give up everything to fulfill your purpose in life will not only cost you the loss of your loved ones but you’re also sacrificing their love for you. Being a pioneer to a new world may get your name in history books but at what cost to what you’ve left behind?

If you want to survive, you’re going to have to make some hard decisions. “The signs were everywhere.” “After a century of reckless consumption civilization was about to collapse under its own weight.” “But in the end, those in power chose a different path. The same they always did, war.”

For over a year now a group of survivors of the nuclear holocaust have been heading to a colony they heard about out west. At each other’s throats and with death knocking at the door the survivors stumble upon an oasis of the apocalypse. But how much longer can they survive until humanity is restored?


Escaped to his basement laboratory, his wife dead on the floor above him. The killers are closing in and this scientist has just one opportunity to send a message through to the past and prevent these horrid events from happening. Just one chance to change the future, just one chance to save his world.

Each film looks excellent. Acting to CGI is almost flawless and done so on a budget. Ultimately like with many shorts, conclusions are left open ended in each one of these mini-films, sometimes frustratingly so. A common audio theme wasn’t enough for these A.I. Tales to connect to each other and could have used a wraparound story to complete the anthology feel. You can see the inspiration behind each one of the tales which all deserved this bigger scale to find their audience.