Watching Movies - The Song of Solomon

Review of "The Song of Solomon" by The Headless Critic 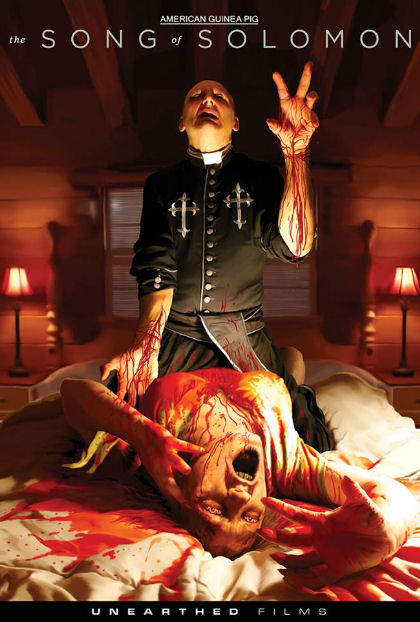 The second coming of Christ is upon us. Prophecy says that before his return the anti-Christ must rule for seven years. A young girl Mary (Jessica Cameron) has been possessed by an evil entity that just convinced her father to kill himself as she watched. The church is called upon to exercise this demon from her earthly body, a task that proves impossible. “An exorcism is one on one, the loser goes to hell.” The Father performing the exorcism must face the demon residing within the girl. Either he saves her soul, or it costs him his own. Father after Father approaches the house each serving a purpose, each of their earthly weaknesses exposed. “Your bible’s will not protect you. Words are not going to save you.” “When the song is finally sung, Lucifer will be unleashed”

This isn’t your subtle exorcism of a little green faced girl who’s possessed, this one is gruesome. Practical effects are top notch, fun and impressive, a throwback to the Savini days of old figuring out how to do what you want within a budget. I dare say that the gore steals the show. This film slits its own throat and pulls its tongue out through the new neck flap. It doesn’t stop at gore. Writer and director Stephen Biro provides an excellent script within the limitations of a budget. The Song of Solomon speaks volumes through its dialogue alone, some of which you’ll find quoted lovingly within this review.

This American Guinea Pig production has the potential to go down in the annals of horror greatness. A cult following may have just been missed through some of the performances. There were obviously some casting issues of good actors who just didn’t fit their roles. Within the characters themselves are uneven performances that at times prove more realistic in certain scenes than others, leading to a probably lack of direction from the sophomore feature director.

I will also note that Biro creates an interesting character in Father Corbin at the acting hands of death metal rocker Gene Palubicki who gives one of the films best performances. Through Palubicki’s portrayal of fallen Father Corbin, I would like to see a possible prequel and what happened to the seven. “All of the possessed need our help, I’m not putting my soul in jeaopardy.” Jessica Cameron’s organ eating deserves mentioning for her extended self-cannibal scene where she vomits up her own organs then swallows them back whole. That scene is a mouth full.

This Song of Solomon isn’t one to be sung for those whose religious beliefs are held close to their heart. I personally found some of the scenes disturbing, both for the physical scenes and their religious implications. If you choose to watch know what you’re getting into. “Let him kiss me with the kisses of his mouth, for your love is better than wine. I am dark but lovely, oh fathers of jerulsalem.” “Pray for us.”