Review of "Slender Man" by The Headless Critic 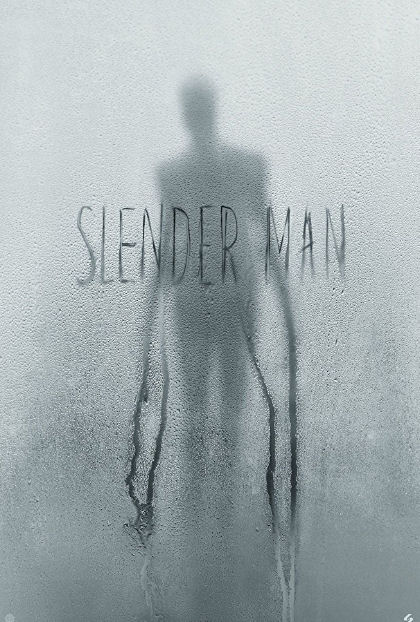 Bored in a sleepy Massachusetts town, a group of four high school girls have what starts as their routine sleep over. They like to stay at Wren’s (Joey King) house because her father is an alcoholic and they can swipe his vodka when he passes out. Having heard the boys talk about the legend of the Slender Man, these girls won’t be outdone. Once called upon, it can’t be undone. He gets in your mind and cannot be forgotten. Some he drives mad, some he leaves mangled, some he takes with him to a place that’s unknown. It starts with a video followed by the chime of three bells. It ends with a walk into the woods you never come home from. All will not be forgotten.

What started as a Creepypasta horror story a decade ago became a modern day horror tale for the post-millennial iGeneration. Ten years later Sony strikes while the iron is lukewarm. Hollywood is right that the internet will slowly kill the movie business but it’s not just illegal free streaming of films that will do it. The next generation is the video game generation whose non-controller entertainment comes from themselves via viral videos and self-written stories. Just like every generation before them has experienced with remakes and re-imaginings, this is their story ruined by Hollywood.

The four youths cast as teenage girls are all excellent actresses I’ve seen before. Two of them are horribly miscast. The first of the four girls and perhaps the most intriguing character Katie (Annalise Basso) goes missing on a high school field trip to the cemetery. Yes, I said a field trip to a cemetery in a horror movie… This is where the film first starts to lose me. Suspense is built on her disappearance; suspense is lost on a slew of failed jump scares. Through a bunch of videos found on her laptop, we see other kid’s horror stories of the Slender Man taking them. He is seen only in glimpses. Perhaps he should have stayed there.

When the Slender Man comes for the second of the four girls Chloe (Jaz Sinclair), they know there’s a problem beyond their friend’s disappearance. This is the movie that tells you not to take your blindfold off, then does it for you overexposing the Slender Man to the point his visual is no longer frightening. The group of friends were willing to go to the other side of the unknown to face the Slender Man and get Katie back. When Chloe turns up gray faced in the window of her own house that’s an obstacle her friends just can’t overcome… They just walk away and leave her there, giving up easily at the sight of her. And why does her face have to be a zombie grey?

The beautiful Joey King of The Conjuring fame has the innocent eyes of an angel, completely miscast as the unsupervised, troubled Wren, with her alcoholic father. The talented actress still pulls it off. Wren is the teen who fights back with knowledge. She’s from the wrong side of the tracks and apparently freaks out at the sight of black people in the library. When the Slender Man is around every corner you turn, when there’s no escaping him, what is the point of fighting for survival?

Julia Goldani Telles has proven herself talented in previous roles. I can see her as a big sister, I can see her as an aunt, a drug addict, bubbly blonde and easily as an objectified sex object. I can see her playing pretty much any role that Jennifer Lawrence would star as. She is not the right girl to be the innocent, Laurie Strode final girl in a horror movie. It just didn’t work.

The most outrageous jump scare fail of all is when Hallie (Julia Goldani Telles) accepts an invitation to “Abercrombie” Tom’s (Alex Fitzalan) house alone amidst all of her friends disappearing. As the two get intimate, Tom has what is perhaps the greatest orgasm ever filmed in cinema. The audience laughs when they should be frightened at this horrible horror fail and it isn't the only time it happens.

Scary movie villains 101, death is the threat and survival is the suspense that grips the audience. Jason Voorhees is a terrifying killer but if you make it to your car you might outrun him. Freddy Krueger haunts your nightmares but if you can stay awake he can't kill you. Jigsaw gives you the chance to repent and therefor free yourself from your sins and his ultimate death machines. Even the seemingly merciless Samara of the Ring offers the chance to figure out the video tapes origins and maybe overcome it.

The Slender Man takes what he wants, there’s no shining light, no chance of survival. You can deal with the devil but winning is not an option. There is no suspense for the audience to grip. There is no way to repent, no way to survive. The Slender Man is without face, he appears however he chooses. He is the shadow on the wall, he is the trees in the forest, he is laughably, spider-man.