Review of "Inhumanity" by The Headless Critic 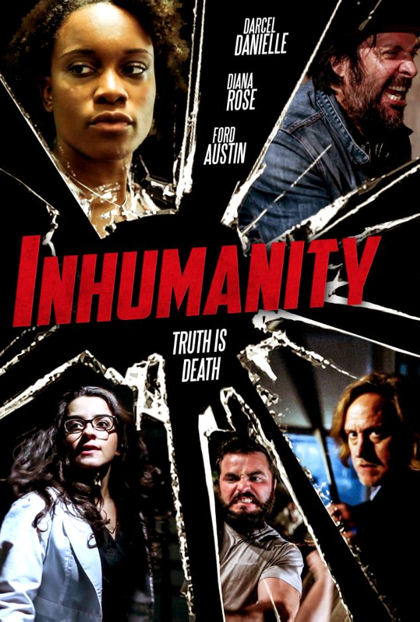 “A beer guzzling, murdering, rapist, terrorizes Austin, Texas killing five girls, one just short of a six-pack. Was Jessa Dixon the lone survivor of the notorious killer Six Pack Sam? And if so why hasn’t she come forward to help capture this monster? And where is Six Pack Sam now? Is he terrorizing other towns, leaving trails of empty beer bottles alongside the corpses of dead women?”

“Where is Jessa Dixon?” After waking up from a coma having survived a brutal attack by a serial killer, Jessa Dixon (Darvel Danielle) is trying to piece back together a life that has fallen apart. With the help of former detective turned alcoholic P.I. Sergio (Ford Austin), the only woman to the escape the notorious “Six Pack” Sam (Leviticus Wolfe) is going to try to put him away for life. There’s more to the mystery than just the whereabouts of a serial killer and the more that’s unraveled the deeper the roots of this mystery goes.

An over-complicated script with an extensive cast tries to do entirely too much. Writer and director Joe McReynolds’ second feature is a deep exploration of a simple crime you’d see on your favorite true crime, murder mystery shows like “Killer Never Caught”. Only once explored, this crime isn’t so simple.

The beards in the film are over-manscaped perfect, the performances, not so much. Lead actress Darcel Danielle stands out awkwardly against an immense cast of scenes shot everywhere, with her calm and realistic performance in what is otherwise largely overacted roles. Leading the over-acting is Javier Garcia whose long hair and beard, which of course is perfectly manicured, are only the visuals setting the tone for this bad guy. With no redeeming value, this Scarface wannabe with a golf club always in his hand never fails to entertain with his so bad it’s good performance. Over all this “true crime” movie does play out more like the reenactment scenes you find on true crime shows.

I’m a proponent of films taking their time to tell a story but extended scenes of nothing could have used an editing eye outside of the filmmakers themselves to pick up the pace. What probably should have been a ninety minute film runs over two hours to an open-ended culmination that seems to liken a sequel.

For all of the film school at work here, Darcel Danielle is good. Six Park Sam is an ominous and interesting character played by Leviticus Wolfe though he may be overexposed with screen time. The dark corporate conspiracy is rarely a storyline that intrigues me so perhaps I’m biased when I say I could have done without it. Javier Garcia entertains awkwardly over-the-top in what may be the real star of this feature.