Review of "Pool Party Massacre" by The Headless Critic 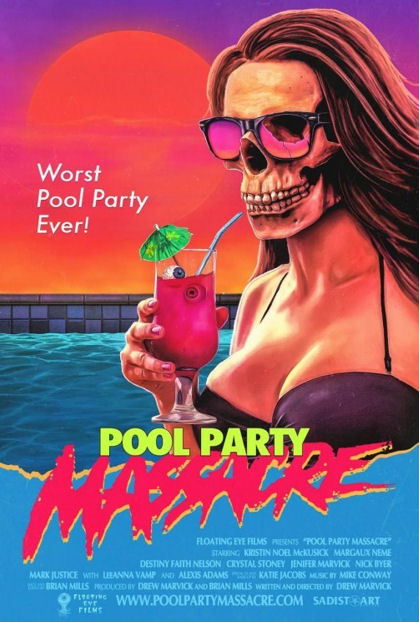 When the parents are away, the kids will play. Rich bitch, Blair Winthorpe (Kristin Noel McKusick) is about to have the house to herself. Her parents don’t mind if she has her friends over for a pool party while they’re gone as long as she doesn’t get pregnant. Their only rules are no hard drugs, no threesomes and no one is allowed in their bedroom. Okay, maybe that’s a little harsh. Threesomes are allowed as long as it’s not the devil’s threeway.

Blaire’s rich bitch besties are all invited and they’re going to turn her parent’s house into a den of sin. Tiffany (Alexis Adams) has an ax to grind with her boyfriend Troy (Mark Justice) if the two can keeps their heads. Weed whacking Jasmine (Destiny Faith Nelson) has a messy landing strip problem. Britney (Crystal Stoney) is a machete slut who finds out more about a Dirty Sanchez than she ever wanted to taste. The only job Kelly (Jenifer Marvick) qualifies for is being a hooker. So instead of laying the hammer down on her boyfriend she better get those lips around that rich dick and hold on tight. Poor Nancy (Margaux Némé) is only invited because she’s Blaire’s best bestie. She doesn’t really fit in but she can fetch their liquor and stuff.

The one thing these beautiful ladies have in common besides being self-centered bitches is that most of them will be dead by the end of this pool party. A garage full of creative murder weapons is just itching to be used and there just so happens to be a killer loose in the house to test them out. Just like any killer from any horror movie in the 80’s you can’t open anything around here without a dead body falling out of it. This psycho might even be doing perverted shit with the dead bodies.

You know what happens when you check out the pool party but you decide not to go right? You don't have any fun! A charming 16 bit intro is followed by a feature that feels like it could break out into pornography at any moment. Don't let that fool you, there's fun at this Pool Party Massacre. Instead it breaks out into campy kills with a retro skin flick feel. It’s a throwback to all the Up All Night horror movies that are remembered for their breasts and blood over their acting or storyline.

It’s hard to decide which is worse, the dialogue or the delivery but somehow both fit this pool party perfectly. Leading the lack of Broadway worthy performances is adult film star Alexis Adams who is convincing as a total bitch but her delivery seemed almost painfully remembered dialogue. The absolute worst best performance of the film goes to Nick Byer whose overacted perversions as Clay are so annoying they’re almost not fun, almost… That Ferris Bueller conversation is just as awesome and unacceptable in theory as the Clay character himself. This entire pool party is a massacre. Writer, director Drew Marvick who also plays Blaine Winthrope is to blame for this best ”Worst pool party ever!”