Review of "The Ranger" by The Headless Critic 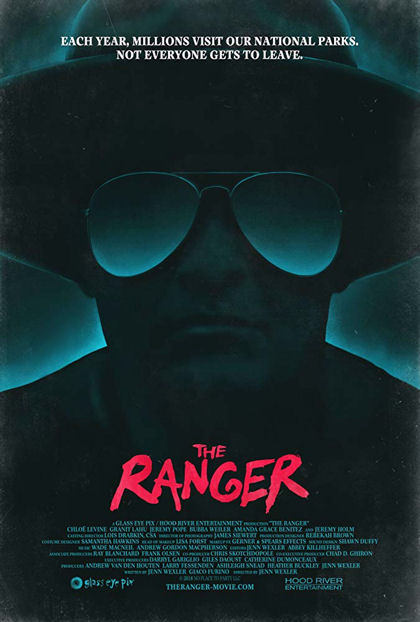 As a child Young Chelsea (Jeté Laurence) lost her uncle, who went missing in the woods and was found without his face, eaten by wolves. As a teenager, a traumatized Chelsea (Chloe Levine) is running from her past by partying with her boyfriend Garth (Granit Lahu) and their punk friends. One night a drug induced act of violence can’t be undone. Now running from the law, Chelsea returns to her uncle’s cabin in the woods to hide out and face a past she can’t forget. “This isn’t the place for you kids to party.” An unhinged Park Ranger doesn’t care about these kid's lawless past as long as they follow the rules of the park. They don’t. The past has come back to haunt them. “Be one with nature.”

“Each year, millions visit our national parks. Not everyone gets to leave.” A group of punk teens on the run decide to hide out in the wrong Ranger’s Park. The use of alcoholic beverages, illegal drugs and the bringing of firearms into a national park is strictly prohibited. There’s no equivalent to those things in nature. That’s how you know they're not good for you. “Take nothing but pictures, leave nothing but footprints.” “Violators will be punished.”

Jeremy Holm is the straight laced David Puddy of Park Rangers. This Patrick Warburtion reminiscent actor plays a psychotic, by the book park ranger perfectly. He could have even used a little more screen time to explore his character. His cast of teens to die are just the right amount of over-the-top and disrespectful to their surroundings to both pay homage to slashers before them and keep it realistic enough for the viewer to care. Leading the runaway cast is the beautiful Chloe Levine who perfectly fits her troubled teen turned badass role. She howls like the wolf she is as they are the same.

A throwback slasher with an original concept from writer, director Jenn Wexler and her co-writing cohort Giaco Furino. If The Ranger had been made in the 1980’s time period it successfully captures the feel of at the height of slasher fare, it would no doubt have been a wide released hit that had spawned enough sequels and remakes to make you sick of it today. In a modern day release of only multi-million dollar blockbusters, this slasherpiece will still find its cult fans through word of mouth and increasing exposure. Horror fans everywhere should seek it out. This is your chance to find a film like The Burning to watch while it’s still new and perhaps playing is a select theater or festival near you.