Review of "Head Count" by The Headless Critic 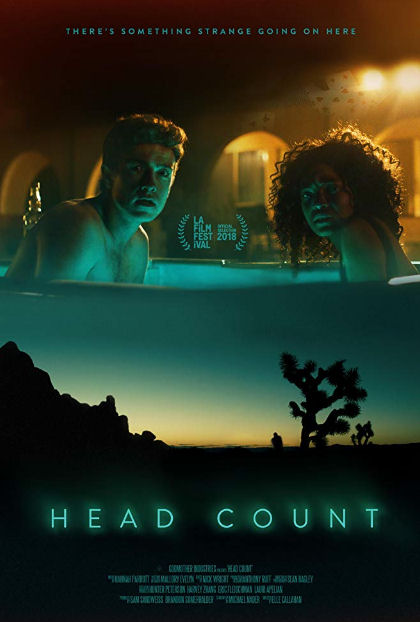 "A HISJI is a vengeful thing
five times its name you never sing
with skin pale white and eyes of green
it’s something you’ve already seen."

During a weekend trip to the Joshua Tree desert, a group of teenage friends unknowingly summon a monster. It’s hard to fight your enemy when it hides among you. Mimicking their sound and appearance, a HISJI has been unleashed. As the teens realize “there’s something strange going on here", the paranormal force works within the group separating them playing its evil game by killing them off.

The feature directorial debut of Elle Callahan is impressively professional, looking like a studio quality production with a befitting eerie score. I didn’t even mind the budgeted CGI monster used which would have been more fun if done practical. A high Head Count of characters doesn’t lead to the horror kills you’d expect. A wrist slitting scene out of nowhere is one bloody and enjoyable kill.

With a setup similar to The Thing, an isolated group of friends are dying off by something that mimics them, looking like one of their own. The young actors mostly appear as real teens headed by the performance of lead actor Isaac Jay. A few exceptions of stereotypical, annoying party teens does little for realism but adds to the body count. After an hour long build the intensity of looming death for the characters just isn’t captured like it was in John Carpenter’s The Thing. This may be a huge comparison to live up to but one I feel is fair with the similarities of script.