Review of "Halloween" by The Headless Critic 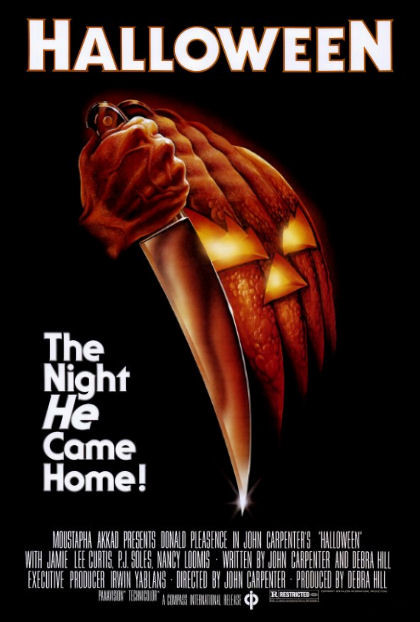 In 1963 on Halloween night in Haddonfield, Illinois, fifteen year old Judith Myers (Sandy Johnson) was stabbed to death by her six year old brother Michael. No one knows the motives of the child’s brutal actions against his own blood. For the last fifteen years Michael Myers has been institutionalized under the study of psychiatrist Dr. Loomis (Donald Pleasence). For fifteen years Michael Myers hasn’t spoken a word. On the eve of Halloween an adult Michael Myers escapes the confines of the institution that’s held him his entire adult life. Now it’s Halloween, October 31st, 1978, “the night he came home!”

Laurie Strode (Jamie Lee Curtis) and her friends Annie (Nancy Kyes) and Lynda (P.J. Soles) are unfortunate enough to be the current high school kids in the year that killer child Michael Myers returns home as an adult. Surviving Halloween night while babysitting is going to prove a whole new challenge this year. Jamie Lee Curtis just may be the best final girl of any horror film, long before “final girl” was a recognizable term. In order to have any good killer, you must have a potential victim the audience can relate to and want to see survive. Laurie Strode defines that role. Laurie hiding in the closet at the end of the film is one of the most simple but intense scenes in cinematic horror history because the story to that point is told so well.

The Shape (Nick Castle), Michael Myers (Tony Moran) is very much a realistic mortal killer. The most frightening thing of all isn’t the body count amassed by this masked killer on Halloween night. Director John Carpenter got away with not showing you the most violent acts or buckets of blood. The murders are minuscule in numbers compared to later slasher standards. The terror is in the realism, the mortality, the character of Michael who is a normal child that is inherently evil without provocation. The brilliance lost in later films is the simplicity of the man who is a murderer by design. That alone is so complex doctors like Loomis literally could spend a lifetime studying him.

In 1978 John Carpenter released what many consider the greatest slasher movie of all time. Even less will argue that it has the greatest horror score done by Carpenter himself. The success of Halloween inspired decades of cinema to come including sequels and remakes. It also launched the overuse of masked slasher killers as much or more so than The Texas Chain Saw Massacre did. Those films would fill the 1980’s forever changing the world as masked killers would reemerged through the children who grew up watching them making their own horror movies. From the cut away kills to some characters overacting, it isn’t the first but it very well may be the best pure slasher film ever made.