Review of "Derelicts" by The Headless Critic 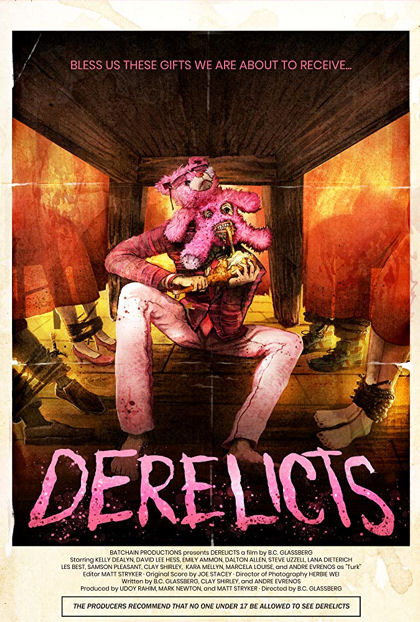 A not so perfect family sets down for Thanksgiving dinner. Grandpa Paul (Pat Turner) and his new girlfriend Bev (Lana Dieterich) are keeping the rest of the family up all night by expressing their love loudly. Dad Gregg (David Lee Hess) is out of work, playing homemaker to a wife he no longer desires. Constance (Kelly Dealyn) has made her work her life. Their son Leslie (Dalton Allen) no longer respects his father. Daughter Barbara (Emily Ammon) is feeling outside and family pressure to be more than she feels she can handle. On top of that there’s more family on their way for the holidays. Adultery, pornography, cocaine and a mental break that’s just waiting to happen. "Bless us these gifts we're about to receive..."

The derelict family is lovingly close. Cap (Les Best) is in charge. The family may not always agree with him but they respect him enough to follow his lead. His war buddy Black Forrest (Sam Pleasant) has been accepted as one of the families own. Big brother Sal (Clay Shirley) watches over his little sister Bo (Kara Mellyn) and they both watch over Turk (Andre Evrenos) who’s the light of the family’s life because he’s not all there. This family comes together to take care of their own. Order, sharing, dressing nice for family dinners and playing together in shared entertainment the whole family can enjoy. Two families come together for a Thanksgiving dinner and all hell is going to break loose.

Co-writer and director Brett Glassberg comes out of nowhere to make the next holiday horror classic! On a budget the first time feature filmmaker makes a 1970’s looking home invasion, slasher that will please even those who hate 1970’s horror, home invasion or typical slashers. It’s a little bit The Texas Chain Saw Massacre, a little bit The Texas Chainsaw Massacre 2, finding the right mix of horror and comedy.

The only thing I can complain about in the entire film are two group action scenes that move quickly and are a little hard to follow. This may have been done intentionally to cover up for a lack of budget and everything they wanted to show. The greatest compliment I can give the film are the actors used at Glassberg’s direction and how well defined the characters are actually making you care about them. The kills are gory fun without becoming torture porn. There’s comedy and laughs but its kept horror. Even at home you should pop for some scenes from excitement.

David Lee Hess (Gregg) is flawless in his performance as a distraught father who feels worthless. As everyone else stands out in their eccentric roles he quietly gives one of the best performances. Kelly Dealyn (Constance) loses her mind in a realistic break from sanity. Dalton Allen (Leslie) becomes the comic relief for most scenes but it works within a film that’s otherwise horror. Emily Ammon (Barbara) is tailor made for a final girl role. She actually looks the part of the teenager she plays with sweet innocence but also a sex appeal that isn’t gratuitous. She screams well and holds a gun even better. The films biggest character arch to me is a character that’s thrown in late Morgan (Marcela Pineda). She goes from lost college student who’s making bad decisions to a legitimate badass who realistically hesitates to pull the trigger.

Cap (Les Best) is a Manson-esque character that stands out enough to be his own. Sam Pleasant (Black Forrest) gives a Samuel L. Jackson-esque performance delivering some wonderful dialogue and coming off as a true bad man who will hurt you. Bo (Kara Mellyn) is a strong female role without bashing you over the head that’s she’s empowered.

In a modern day world of young filmmakers who grew up on masked slashers, everyone wants to make the next great masked killer. They focus on their mask and potential sequels instead of focusing on what they should, making a good movie with good characters. Turk (Andre Evrenos) is much like Leatherface in the original 1973 The Texas Chain Saw Massacre. He’s a character among many but isn’t meant to be the star. His mask is creepy like no other I’ve seen in awhile but its origins feel authentic and not forced.

Clay Shirley (Sal) reminds me of actor Peter Greene and Ted Levine as Buffalo Bill in what may be my favorite performance in a slasher film full of good performances. Yes you heard that right. Derelicts isn’t a success because of its fun and gory kills alone. It doesn’t rely on a mask. Characters are built well and a simple horror story is told. It doesn’t need background or emphatic character arches because it does what you see impressively well and leaves the rest to the audiences prolific imagination.

Buffalo Dreams Fantastic Film Festival 2018 screened over twenty feature films. Many great movies will get distribution and be seen by audiences across the world. Others are locally made on shoestring budgets that may have had the biggest audience at their Buffalo premier. My personal favorite horror film of this year’s Buffalo Dreams Fantastic Film Festival is Derelicts. While I'm sure it will see a VOD and Blu-ray release, out of the wide selection of films at Buffalo Dreams that covered a little bit of everything, this one is a gem. I think would play well to audiences in a national theatrical release. For horror fans I believe it’ll go down as the next holiday horror classic. Thank god we finally got a good Thanksgiving movie. Derelicts might just be the best Thanksgiving movie since Plains, Trains and Automobiles. Now that's a hell of a comparison!