Review of "Terror Tales” by The Headless Critic 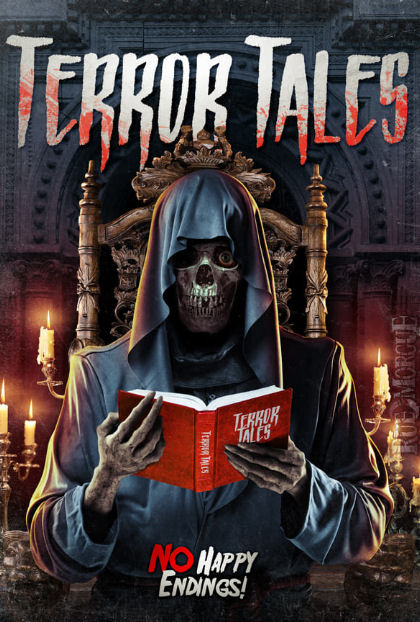 While driving down the road a family of three run over a board of nails sending them spiraling right into a psychopath’s captivity. With his Wife (Pam Renall) and Daughter (Bailey Sorrel) tied up in a cargo trailer being pulled behind them, a Husband (J. Giordano) must ride shotgun at the end of a gun. To keep his family alive this loving father and husband does what he’s told including listening to a kidnapper who likes to succumb his victims to story time. The following are three tales from the mind of a madman.

By Proxy:
After the suicide of her young son Trevor, popular horror writer Susan McKay (Lynn Lowry) struggled with a depression that was only made worse when she had to stand trial for the wrongful death of her child. Her acquittal led to her assassination. In death a Demon (Matt Block) forced Susan to relive the life and death of her son. Much like Ebenezer Scrooge and the ghost of Christmas past, she’s forced to live out the sins of her lifetime and see the effects she had on the people she loves.

Radical Video:
The black masked Sledgehammer Killer (Jonathan Tiersten) is flattening the heads of women as he bluntly murders them. Alcoholic Detective Stevens (Brett Shafer) is going to find that sick son of a bitch. The trail of this murder leads to Radical Video, where a disgruntle customer becomes the primary suspect. Store owners Blaine (Ben Hitzer) and Tiffany (Miranda Byers) just asked for the late fees from the wrong patron.

Epidemic:
“I’m sorry honey, go with God.” A local pastor James Douglas (Tom Fears) claimed his wife was possessed by the devil before he killed her to free her spirit. Long locked away in an insane asylum, the Church now believes there’s truth in the faithless preacher’s claims and they’re going to use his daughter’s possession to get him to do their bidding. “Now the past will help explain the present” but it may be too late as possession spreads through the world like a disease.

“Will you survive the Madness?”

There's are lot of familiar faces in these comical tales of terror including, Lynn Lowry (The Crazies), Helen Udy (My Bloody Valentine), Yan Birch (The People Under the Stairs), Laurene Landon (Maniac Cop), Ari Lehman (Friday the 13th), Jennifer Runyon (A Very Brady Christmas) and Felissa Rose and Jonathan Tiersten of Sleepaway Camp. They’re mostly in scenes that come in a quick flashback to 1692 in Salem, Massachusetts, though Lynn Lowry gets the starring role in her own segment “By Proxy”.

Most filmmakers start with short films. I love the idea of an up and coming director like Jimmy Lee Combs utilizing shorts already made or as he learns to write, direct and fund a feature, creating an anthology feature of short films. Terror Tales has poor sound quality that a lot of low budget feature suffer from. Overacting, a satire sense of humor that I just didn’t get and possibly the worst sound effects of any movie I’ve ever seen outweigh the good here. Even though it’s just sound effects in the background it’s distracting to the point of taking you out of the stories.