Review of "Butterfly Kisses” by The Headless Critic 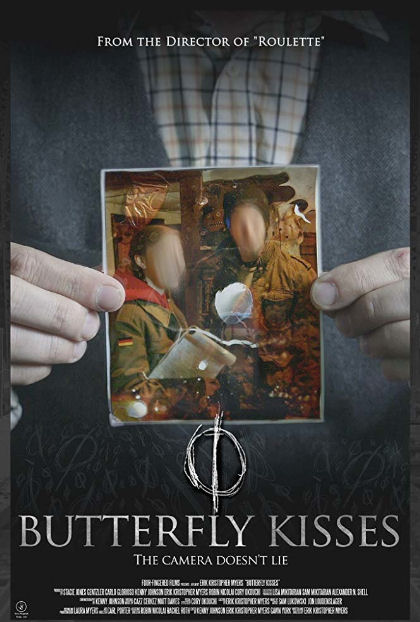 A wedding photographer Gavin York (Seth Adam Kallick) sorting through old tapes finds footage made by a couple of college students trying to prove that their local Maryland urban legend known by many names including The Peeping Tom is real. With the original intent to prove that The Peeping Tom is real by exploring the works of the unknown students and release it as a work of his own, Gavin has to prove his own story is real and not faked found footage. As a film crew follows him, he loses himself in his work as the lines of reality are blurred and no one seems to believe his work is real.

A documentary on a filmmaker who’s making a found footage film about the tapes he found of two student filmmakers who seem to have went missing while investigating a local legend called The Peeping Tom. If you’re still with me, Butterfly Kisses adds a third level to found footage filmmaking. It’s kind of like watching MTV’s Catfished where a MTV film crew follows two filmmakers helping young people who’ve been misled online. It’s a lot simpler in the movie than in written word.

Erik Kristopher Myers writes and directs this layered found footage movie that’s credited as a documentary even though it’s really not. Performances vary and it’s very possible some interviews conducted in the movie are real, though actors were obviously used in other parts of the film. Myers tries to do something different with the found footage subgenre of horror that’s been very overplayed since the release of The Blair Witch Project in 1999. I don’t think any film has been able to suspend disbelief that what we’re watching might be real since The Blair Witch. Most filmmakers only use the found footage style of filmmaking as a reason to be lazy or cover up their lack of professionalism. Myers offers a documentary style film that’s one of very few movies that actually fits in the genre well.

The myth of the “Peeping Tom” name is a little juvenile but the legend portrayed is actually similar to several horror legends across the U.S. and possibly the world. It makes for some creepy scenes throughout the film. The three layer aspect of filmmaking is different and well done so it’s easy to follow. The footage used by the college students is what I found most intriguing. It’s short which is perhaps why it’s so successful.

Found footage movies are not a style a filmmaking I enjoy but Butterfly Kisses does it better than any other I recall seeing in the last 19 years. Like any good Blair Witch successor you need a good ending with your nose against a wall. The ending is where I think the movie is most successful. Without giving anything away, I like the discovery in the eye of the image they’re able to capture and that end scene at the tunnel got the butterflies in my stomach just as it would if my friends and I decided to go there and look for The Peeping Tom ourselves.