Review of "Lords of Chaos” by The Headless Critic 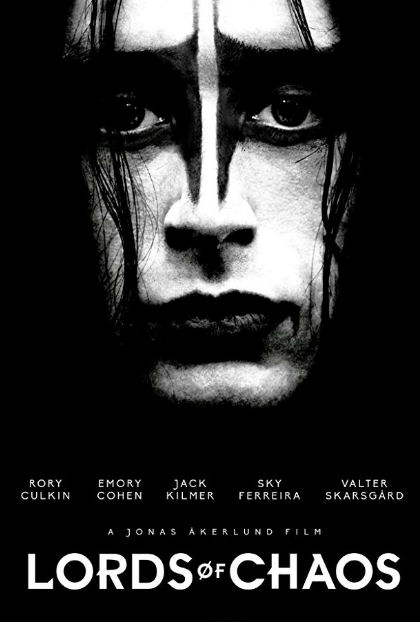 “Based on Truth and Lies.”

The beginnings of Norwegian Black Metal left a fiery, blood soaked trail across Oslo, Norway throughout the late 80’s and early 90’s. Norway was one of the most religious countries in the world with one of the lowest crime rates but the suicide rate was one of the highest. Euronymous (Rory Culkin) was an average kid from a traditional Norwegian upbringing. He’s also the Satanist creator of the Norwegian’s first Black Metal band Mayhem which started the Norwegian Black Metal revolution that changed a country. By the time violence, church burnings and murder were attributed to the newfound music genre, the movement was unstoppable. Warning, there is no happy ending.

Hard to watch for all the right reasons, former Norwegian Metal rocker Jonas Åkerlund directs a real life horror story. This movie is utter mayhem! Cruelty towards animals, including humans, depicts the events that led a group of upstart musicians into a black circle of Satanism with hostilities towards the Catholic Church and each other. Hate crimes, arson, masochism, torture, murder and suicide on a dark journey to the depths of what humanity is capable of. This movie is violent. I am a horror critic and I cringed at several scenes. Each stab wound inflicted is felt and has meaning.

Underneath the violence in the lack of humanity is a very human story of friendship, betrayal, depression and wanting to belong. Rory Culkin and Emory Cohen (Varg) rival each other in a shift of power done subtle and right. Each actor defines their character well with Culkin impressing once again in another multi-layered role. The end wraps up a little too quickly in the full circle turn of Euronymous but so is the way of life. Excellent job in a movie I highly recommend to every horror fan who thinks they can handle it. Those offended by anti-Christian actions, violence towards animals or realistic depictions of violence towards humans will be horrified by this film. It stays with you.

Available Now in Select Theaters and on Amazon Prime