Review of "The Intruder” by The Headless Critic 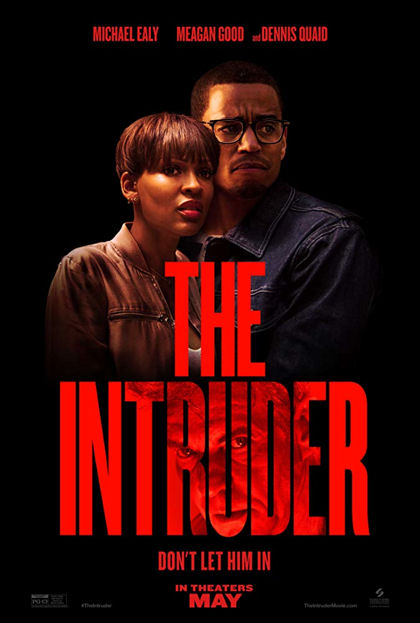 Ready to escape city life, Scott (Michael Ealy) and Annie Russell (Meagan Good) buy a 3.5 million dollar home in Napa Valley. The picturesque Fox Club estate has been on the market for years because owner and family man Charlie Peck (Dennis Quaid) wasn’t just going to sell it to anyone. It’s Charlie’s prized possession. It’s where his family was raised, where his wife died of cancer. The only reason he’s selling his beloved home is because his daughter wants him to move in with her in her Florida home. Some things we value more than money. Sometimes we just can’t let go…

Deon Taylor’s The Intruder follows a very familiar obsessed stalker movie formula. I can’t quite place my finger on a title it mirrors but it’s overall recognizable as something we’ve seen before. That doesn’t make it any less enjoyable. The David Loughery script is a throwback done its own way. Loughery wrote two of my favorite under the radar 90’s action movies, Passenger 57 and Money Train. In a Hollywood world following cookie cutter molds we’ve seen too much of and others trying to stand out as something original, sometimes it’s nice to just give us something familiar but do it your own way.

Meagan Good is an absolute knockout in her lead role as Annie Russell. The veteran actress somehow came out of nowhere to impress me with not only her beauty but her performance. This is a Hollywood leading lady and I don’t know where she’s been all my life. Dennis Quaid equally impresses in the most layered role in the film. The sixty-five year old actor easily pulls of fifty and is stunningly fit and believable in his role as stalker Charlie Peck. While a man as meticulous as Charlie Peck slipping into an all-out rage doesn’t quite fit perfectly into the script, Quaid takes us on a slow slip from sanity that’s fun to watch. The ending makes a statement while I'd rather have been more entertained but it's still an enjoyable if not at times predictable movie to watch.