Review of "Wild Boar” by The Headless Critic 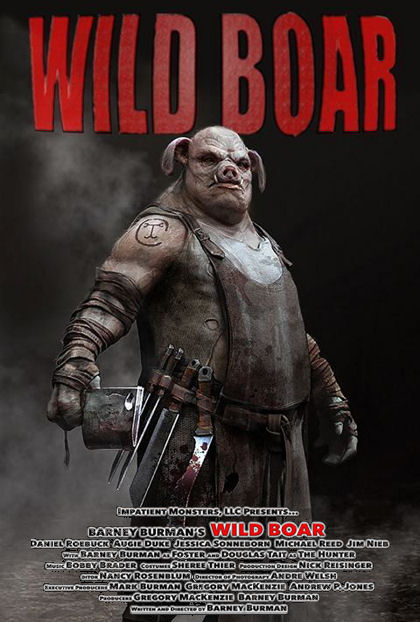 ge·o·cach·er
/ˈjēōˌkaSHeR/
noun
noun: geocacher
1. any person who participates in the recreational activity of hunting for and finding a hidden object by means of GPS coordinates posted usually on a website.
2. Food

Geocatcher Griffin (Michael Reed) just found the coordinates to the legendary Foster geocast challenge. Entrepreneur and fellow geocatcher Roger Foster (Barney Burman) allegedly disappeared while geocatching in a forbidden zone that was once off limits due to radiation from a toxic explosion. With his girlfriend Sable (Jessica Sonneborn), his friend Wolf (Daniel Roebuck), Wolf’s brother Turtle (Jim Nieb) and girlfriend Lamb (Augie Duke), the group of five treasure seeking friends set out for the middle of the desert to find what Roger Foster may have left behind. Down the rabbit hole they go into a forbidden world once flooded with radiation. Now inhabited by a race of mutant man pigs that have evolved into man-like creatures, “out there we eat them, in here they eat us.”

A lesson in how we treat our cattle, Wild Boar role reverses the animal we turn to for all our replacement parts. Now we’re the other white meat. A little bit Wrong Turn, this Planet of the Apes inspired script is the visual gore creation of special effects master Barney Burman and it looks amazing! It’s the wildest pigshit you’ve ever seen. Horror fans will rejoice at these practical effects that they’ve been missing. Barney Burman just created the next horror classic for the cult following of Hell Comes to Frogtown. The only thing that was missing was Rowdy Roddy Piper but these bloody, hot women will do. They’re lucky she’s vegan. Halfway through the year and I already know Wild Boar is a top 10 horror film of 2019. It's the Turbo Kid, Hobo with a Shotgun grindhouse horror film that’s been missing. A must see.