Review of "Brightburn” by The Headless Critic 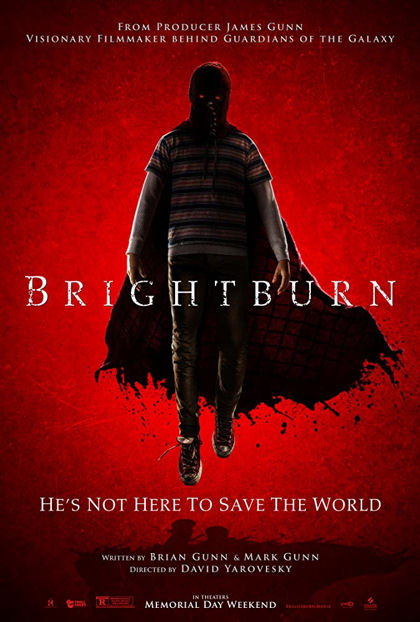 In 2006 a meteor shower over Brightburn, Kansas made news lighting up the night sky. A fire in the woods behind Kyle (David Denman) and Tori Breyer's (Elizabeth Banks) home that night got their attention. Among the wreckage of what pelted Brightburn, Kansas was a baby in a small space craft. For years the young couple had prayed to God or whoever would listen to give them a child. Someone finally answered their prayers and made their dreams come true but this dream would turn out to be a nightmare. What if a child from another world crash landed on Earth with the powers of a superman, but instead of becoming a hero to all mankind he becomes their undoing? “He’s not here to save the world.”

Since his possibly brief falling out with Marvel, Guardians of the Galaxy director James Gunn takes on a producer role for a film written by his brothers Brian and Matt Gunn and helmed by director David Yarovesky who worked with Gunn on Guardians and The Belko Experiment. Mirroring an unofficial telling of Superman’s upbringing in an alternate Smallville world where good parents and small town values aren’t enough to overcome evil, Brightburn may not be part of DC’s new universe but it is heavily hinted at. It is also better than any post-Christopher Nolan film that has come from DC. The Gunn brothers tell an original origin story of their own creation of sorts and if successful at the box office could easily spawn into the Guardians of the Galaxy film creator’s own superhero or supervillain universe.

Sometimes small town values aren’t enough. Focusing on the family dynamic and horror, Brightburn is how I would prefer my superhero, or supervillain films to be. Instead of being an all-out world consuming alternate reality, it’s relatable. It isn’t superman destroying cities as he battles aliens, it’s a young boy growing up in a town any of us could live in. The cast is excellent from The Office alum David Denman, to the always enjoyable Elizabeth Banks and a newfound actor I will keep my eye on Matt Jones. The casting I enjoyed the least was that of Brandon Breyer (Jackson A. Dunn) who comes off more Kylo Ren teenage angst than he does anything evil but at twelve years old his character has time to grow for any potential sequels.

Brightburn successfully combines horror and supervillain better than any film I recall seeing. Some CGI effects, especially of blood aren’t realistic but I still enjoy that jaw dropping scene of a truck crash. With Marvel trying to exile James Gunn and potentially ending the Guardians of the Galaxy, I hope as a film fan to see more works of his own creation with a continued focus on story and characters, instead of falling under the limitations of the DC banner. For those looking for the next action packed Zack Snyder Man of Steel, Justice League movie Brightburn isn’t of the same universe, it’s actually good.