Review of " Hi-Death” by The Headless Critic 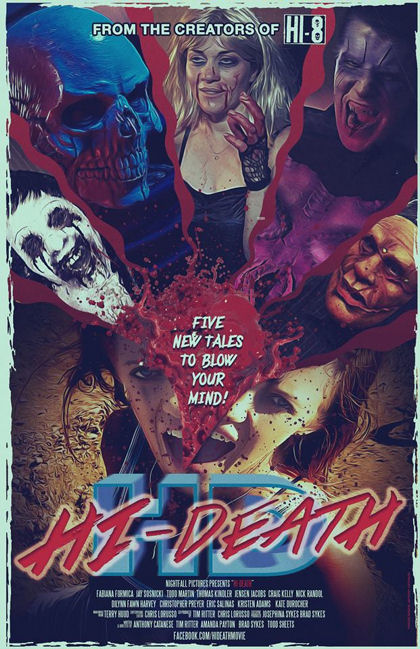 What is there to do for two young women on their first day in Hollywood? The Chinese theater and wax museum don’t really interest horror film freak Jordan (Kristen Adams). When she sees a flyer for a Hi-Death Terror Tour she drags her best friend Lexie (Kate Durocher) sightseeing via an app on her phone through the seedy side of Hollywood. Their self-guided journey is way cheaper than one of those tour buses and way more fun, at first... Watching five horror videos on their phone the girls travel their way through the terrifying underbelly of the off the beaten path part of Hollywood getting directions to their next stop at the end of each video. Warning, the following films are presented in HD, Hi-Death.

Death Had a Conscience
Looking to get a quick fix it’s time for punk chick Erin (Jensen Jacobs) to wake up. WAKE UP! The only problem is she can’t wake up anymore because after going to sleep this night Death (Craig Kelly) is at her bedside. You weren’t running from death when you were shooting that poison into your veins, why are you running now that death has answered your call?
Written & Directed by: Anthony Catanese

Dealers of Death
A masked man known as the switchblade bandit is breaking into homes and stealing people’s money. The real thrill in life for Marty Lustig (Todd Martin) isn’t breaking and entering or robbing and stealing, Marty is a dealer in death. This amateur criminal is into snuff films in his free time and collecting artifacts from real life murders as a hobby. This junkie may have just robbed the wrong house to get his horror fix.
Written & Directed by: Tim Ritter

Night Drop
At his local video store Trevor (Christopher Preyer) is closing out for the night for the first time by himself. Someone has returned a disc in the 24 hours night drop in a red case but their store doesn’t use red cases. Most returns that don’t belong to the store are voyeuristic couple’s home videos but when Trevor watches the DVD he sees the vilest most depraved images he’s ever seen in his life and he works at a video store.
Written & Directed by: Amanda Payton

Cold Read
A struggling actress Julianna (Fabiana Formica) in her early forty’s had to rearrange her life to make her latest audition just to find out that the assistant Caitlyn (Julia Vally) gave her the wrong script to prepare for. With the director (Jay Sosnicki) being unsympathetic to her situation and to be honest an unbearable ass, Julianna offers to do a cold read on the script she should have been given if it’ll help her get the part. Acting auditions can be savage.
Directed by: Brad Sykes
Written by: Brad & Josephina Sykes

The Muse
Written in blood an artist finally paints his masterpiece with an ancient evil attached to him whispering in his ear. His final creation is a seductive piece of art that will make him eternal. Be careful what you wish for.
Written & Directed by: Todd Sheets

From the makers of the independently released horror anthology Hi-8 where eight indie horror directors come together with an octuple of horror shorts, five low budget indie filmmakers unite for a Hi-Death sequel. With three returning directors, Todd Sheets, Brad Sykes and Tim Ritter and newcomers to the series Amanda Payton and Anthony Catanese five unique horror visions are brought to the screen for your viewing pleasure, displeasure and disembowelment. Snuff films, a haunted tape, a parasitic demon, madness and the Grim Reaper haunt this anthology of horrors.

Nothing kills an indie film quicker than poor sound quality. In Hi-Death it’s all about the Hi-Def with some shorts and the wraparound having some audio issues. Voice modification in Death Had a Conscience has an enjoyably looking Death having a voice that’s almost unintelligible. No color coding can fix that. The Muse drones on with a close-up of his mouth and the Switchblade Bandit is a little too monotone making both characters irritating even in a short. The wraparound which is filmed outside simply sounds like amateur audio.

With so many great shorts out there from great filmmakers I love the idea of bringing the best of those to anthologies like Hi-Death. Brad Sykes Cold Read is exactly the kind of short I’m talking about when I say that. Dealers of Death is another great example having a really good script of realistic horror that maybe didn’t have the funding behind it that it deserves. I also loved revisiting the video store in Night Drop. Hi-Death is a nice variety from different directors that low budget horror fans should enjoy.