Review of "The VelociPastor” by The Headless Critic 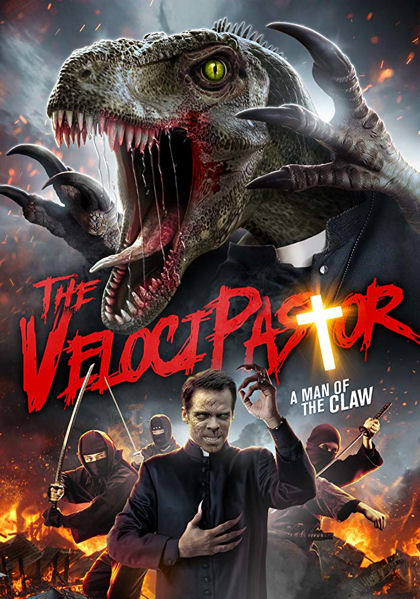 “Rated X by an all-Christian jury.”

His name is Frankie Mermaid because he’s swimming in bitches. If Jerry would stuff dicks in his mouth like he does those sandwiches, petty street pimp Frankie would be a millionaire by now. Frankie killed the parents of Pastor Doug (Greg Cohan) in a VFX: Car on Fire. “That’s what parents do, they die on you.” As Pastor Doug searches for his faith in the forests of China he inherits a faith questioning, God-given ability that turns this Pastor into a velociraptor.

He doesn’t believe dinosaurs ever existed and even if they did he certainly doesn’t turn into one. Then one night he saves a hooker with a heart of gold. Firstly, she’s a hooker and she doesn’t want to be arrested, second he turned into a dinosaur and he ate someone. She doesn’t know much about God, he doesn’t know much about dinosaurs but they’re about to learn everything about each other. Pastor Doug and Hooker Carol (Alyssa Kempinski) team up turning this Jurassic killing machine in the body of a Pastor into the VelociPastor. They will kill for the good of all mankind.

Writer and director Brendan Steere fought some ninja's last night and maybe one of them followed him home bringing us this Steve Oedekerk worthy feature disguised by a Syfy movie of the week title and poster that are bound to get attention. If the title and poster of a Pastor Velociraptor attracts the CGI, Syfy, monster movie of the week audience, most of those fan will be disappointed. There are no CGI monsters in this unholy combination of a “Man of the clawth” but mannequin heads will roll as bad dinosaur costumes rip them off!

“How long has it been since your last confession?” I must confess, the over-the-top comedy of Velocipastor isn’t to my personal tastes but the large cult audience who enjoy Steve Oedekerk films should love it. The dialogue throughout the film is excellent, much of which you'll find ripped off for this review. Greg Cohan plays the perfect lead in velociraptor form showing the lookalike ability of a Chris Pine and the killing machine tendencies of Michael C. Hall’s Dexter with a dash of a young Matt Damon for good luck. It is better than a film titled Velocipastor should be. There was passion and a sense of humor behind it from the filmmakers who seemed to have fun.

“Only through the elimination of violence, will we finally be able to achieve world peace.” - Gandhi