Review of "Nefarious" by The Headless Critic 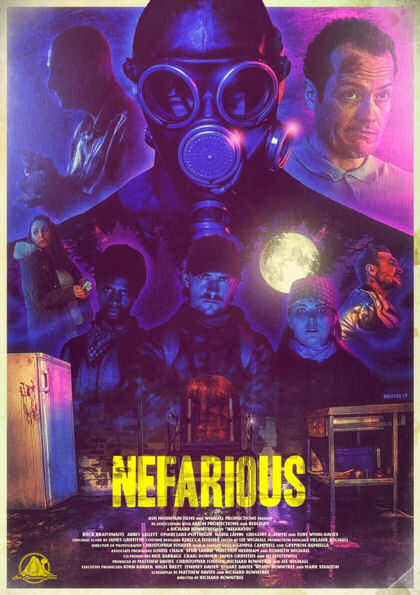 Indebted to a criminal kingpin, Darren (Buck Braithwaite) has three days to come up with two grand or he and his girlfriend Lou (Nadia Lamin) will meet a gruesome end. Having just lost his job because his disabled co-worker Clive (Gregory A. Smith) complained about him, Darren doesn’t feel bad when his sister Jo (Abbey Gillett) suggest they break in and steal from Clive and his wealthy, caregiving brother Marcus (Toby Wynn-Davies). A simple breaking and entering turns complicated when they find the empty house they thought they would easily rob is occupied. “Sometimes you have to turn to crime, sometimes, it turns on you...”

British filmmaker Richard Rowntree and co-writer Matthew Davies follow-up their debut feature Dogged with another slow build with a twisted turn. A yin yang of filmmaking grittily films a group of poverty stricken friends with little hope for the future. Only the other side, better sound quality and cinematography shows a well off family with nice performances from both Gregory A. Smith and Toby Wynn-Davies. The failure to build likability in a cast full of criminal characters seems to be leading to a dull, amateur, slow burn horror movie. A nefarious turn in the final act is both comical and cringeworthy. More movies need a vat of acid. There is no remorse in the finally, it is brutal and absolutely worth sticking around for.