Review of "The Final Interview" by The Headless Critic 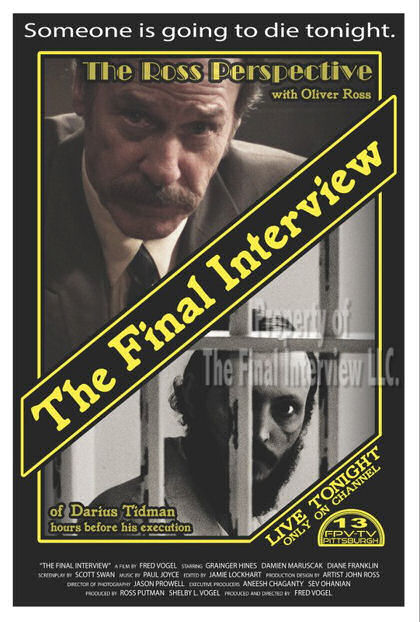 What room is there for interpretation when another human is savagely hacking you to death? In the following hour you will hear an interview with one of the world’s most notorious killers in their final outlet to tell their side of the story, to seek redemption and if they want to, give the families of those they killed closure.

The once respected reporter turned investigative television show host Oliver Ross (Grainger Hines) is in the twilight of his career. On his fourth wife with family trouble at home and a drinking problem he was reluctantly reliant on his ex-wife Rhonda (Diane Franklin) to get the gig hosting his newest show The Ross Perspective. Every week Oliver Ross interviews another killer on death row just hours before their execution. This week’s mass murderer is Darius Tidman (Damien A. Maruscak), perfect, shiny and glowing. He isn’t even the most famous killer to be executed tonight, he’s just the biggest name The Ross Perspective could get. Tidman is just your run of the mill man who snapped and killed a few people, nothing exciting. To be exact he painted the room red with twenty murders. He is the monster God his abusive father always told him he would be.

“Why does a raven like a writing desk, maybe because you’re a piece of garbage.” From notorious low budget gore director Fred Vogel comes a completely unexpected character driven, dialogue based thriller that is well thought out, layered, with wonderful performances in what truly is one of the finest examples of low budget filmmaking I’ve ever seen. Nearly a decade between directing films has done the gore director well proving how much he's grown as a filmmaker.

From the director’s name, you’d expect people to be mutilated without much of a story behind it. From the promotional material you’d expect a slow boring feature resembling films of the 70’s and early 80’s you’ve long since forgotten. What you get instead is one of the finest performances that I’ve seen all year from Grainger Hines. If Hollywood had legitimate awards this man’s name would be being talked about for his role in this film. His counterpart Damien A. Maruscak holds his own at times channeling Charles Manson with his stares into the camera. The two actors have a verbal back and forth that is ratings inspired within the film and is simply excellent to watch. The Final Interview isn’t just a good independent movie or a good horror movie, it’s excellent filmmaking that captures the time period it’s set in with two enthralling performances.