Review of "Reed Unbound: The Joel M Reed Story" by The Headless Critic 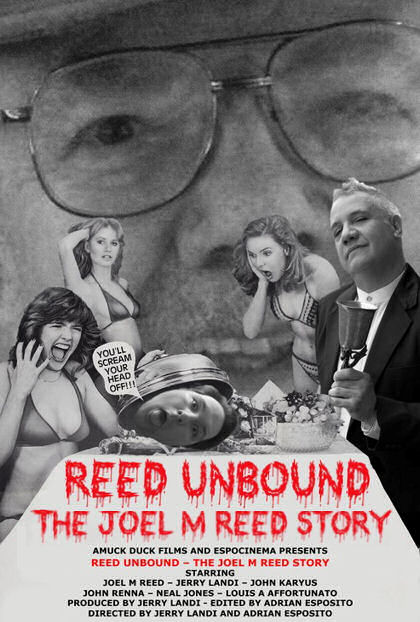 One of the most notorious sexploitation films of all time was released in 1976 by controversial B-Movie filmmaker Joel M. Reed. Panned by critics as an exploitation of gross-out cinema, something struck a chord with audiences and made a little film lost in the 70’s live on for forty plus years to come. Growing up like many other horror fans a fan themselves of Blood Sucking Freaks, independent filmmakers Jerry Landi and Adrian Esposito sit down for an evening with the man who created a sexploitation film that has gained cult cinema status.

While modern day Hollywood is progressing off the casting couch rumors into equality sit down for an evening with the man who’s admitted motivation to make movies was to get laid. Hear his stories of the founder of MGM Louis B. Mayer molesting a twelve year old girl, actress Angelique Pettyjohn working as a prostitute on the set of his film Wit’s End, his time working with actresses P.J. Soles and Doris Roberts, taking Frank Sinatra's women out on dates so he didn't have to, being turned down for parts by Paul Newman, Joanne Woodward and Hervé Villechaize, the tragedy that befell the cast of Blood Sucking Freaks and Donald Trump not being able to pick up women. The man who admittedly learned filmmaking from the ABC’s of Cinema handbook tells his experiences in filmmaking told his way. Truth or fiction this is Reed Unbound, The Story of Joel M Reed.

Hear from actor John Karyus, actor and filmmaker John Renna and horror historian Neal Jones about the importance of Joel M. Reed’s contribution to the horror genre and the importance of Blood Sucking Freaks and the cult following its inspired. Joel M. Reed tells an amazing story of his time in the filmmaking industry. When Reed Unbound sits down with him to hear his outlandish tales of Hollywood it is fascinating. I could have watched an hour and a half of Joel alone. A lot of this documentary about Joel M. Reed focuses on director Jerry Landi’s story. From his fascination with Reed growing up to his interactions with Joel and Joel's caregiver while making this film. Documentaries often face difficulties getting their stories told but it’s important to remember to put the focus on your subject not yourself and as a filmmaker you must always remember, no fuzzy wuzzies.