2nd Movie "You Might Be The Killer” by The Headless Critic 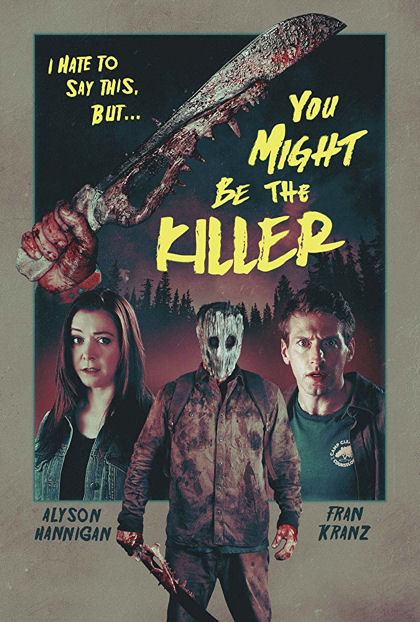 It’s summer camp, what do you expect? Camp counselors are dying at an alarming rate. It’s like a scene from a horror movie out there. Head camp counselor Sam (Fran Kranz) is held up in a cabin hiding from a masked killer whp has a body count outside of at least nine counselors. Trying to live through the night with no escape in sight Sam calls his horror enthusiast friend Chuck (Alyson Hannigan) to help him make it through what seems to be a real life horror movie. The events of the night unfold and the true killer is unmasked but who will survive?

A vast array of horror homages includes final girl characters and actresses names like Jamie (Jenna Harvey), Drew (Sara Catherine Bellamy), Nancy (Savannah DesOrmeaux), Heather (Carol Jean Wells) with so many more lines, characters and scenes. I’m sure I didn’t see them all and couldn’t cover them in a review if I did. My two favorites are two characters, the blood covered Sam (Fran Kranz) looking like Ash from Sam Raimi’s Evil Dead and red headed Chuck (Alyson Hannigan), a perfect name for a redhead in a horror movie who references her own past characters several times. It’s their performance especially lead Fran Kranz that put this movie over the top of greatness.

In the recent tradition of horror comedies, Brett Simmon’s You Might Be the Killer joins Cabin in the Woods, Final Girls and Tucker and Dale vs Evil as the next great self-aware horror comedy. Told in an untraditional sense of flashbacks filling in the gaps of lost memories, I would like to see a linear version of the film. Like the non-linear Pulp Fiction it might not play out as well but perhaps that’ll be a feature on the future Blu-ray release I'll surely be getting. It is a predictable movie as all throwback slashers should be. Getting what you expect is a good thing if it’s exactly what you want and You Might Be The Killer is my favorite horror comedy of the year.