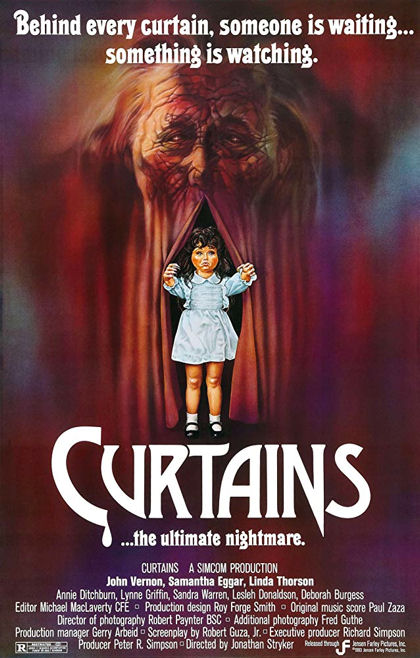 In a Hollywood world of cutthroat acting, someone is always waiting to take your part. “Behind every curtain someone is watching, something is waiting.” Samantha Sherwood (Samantha Egger) is a regular actress used by famed director Jonathan Stryker (John Vernon). Audra just knew in his upcoming film she was going to star in the title role. To research the part of Audra Stryker sets Samantha up to be committed to an asylum as a psychiatric patient. What Samantha doesn’t know is that he intends to leave her there indefinitely as he holds a secret audition for the part he promised her. at a mountainside mansion with six younger actresses via for the starring role.

At a mountainside mansion six young actresses, Brooke (Linda Thorson), Laurian (Anne Ditchburn), Patti (Lynne Griffin), Tara (Sandie Currie), Christie (Lesleh Donaldson) and Amanda (Deborah Burgess) who all come from varying backgrounds, take up temporary residence all vying for the same starring role. Someone is wearing an old hag mask Stryker uses to audition pretty young actresses in and is killing off these Hollywood hopefuls. “Six beautiful girls, trying to get ahead when the curtains fall, five will be dead.” “The stage is set for the final act.”

With one of the creepiest, most underappreciated masks in horror history, Belgium director Richard Ciupka makes a largely forgotten slasher film. Writer Robert Guza Jr. creates a daytime soap opera for horror films solidified with a mansion setting and dramatic performances from a nearly all female cast of victims. The old hag mask provides truly creepy visuals including a slashing on ice that will scar children for life. The unreality of overacting, logic of script and a lot of cutaway kills kept this excellent killer from going down as the first classic, masked female slasher. The old hag is horror movie perfect. A creepy doll that moves where it wants is a little much. The unabashed Jonathan Stryker played by John Vernon oozes 80's machismo. A director having his way with the majority of actresses auditioning for a part at a secluded mansion casting session leaves a lot to be desired from a different world than we live in today.