Review of "Countdown” by The Headless Critic 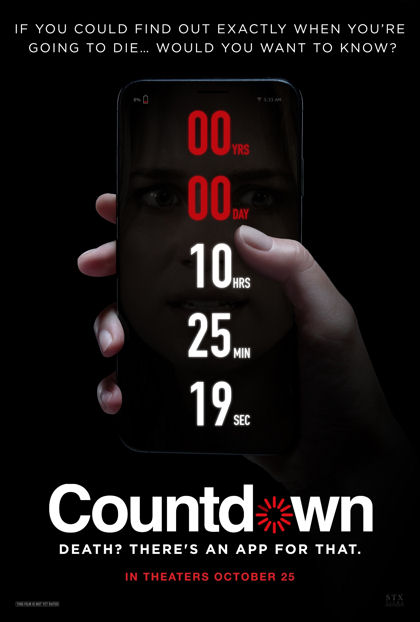 A marketing ploy was started perhaps in 2007 with Paranormal Activity showing audience reactions in the theater instead of an actual trailer, while being marketed as the “scariest movie” of the year. Generally every movie marketed this way since besides the Paranormal Activity sequels have been an independently made feature picked up and marketed to make a buck. In a Hollywood world of blockbuster budget, studio productions and micro-budget independents, Justin Dec finds the middle getting a mid-budget, multi-million dollar horror film made and distributed across the country. Countdown is 2019’s audience reaction, “scariest movie” feature for Halloween.

It simply isn’t the scariest movie of the year but over-hyped marketing aside let’s not give up just yet. Final Destination via phone app for 2019, Countdown cuts away from the cutting edge death scenes that made Final Destination so popular with a lot of things falling to their deaths instead. Whether you eluded your final destination or downloaded an app for a countdown to your expiration date, avoiding death proves difficult but perfectly suited for horror.

Elizabeth Lail got a lot of hate for her role in the Netflix series You. She makes a perfectly fine but forgettable leading lady who thankfully wasn’t cast as a teen for this role. Her love interest, sidekick Matt Monroe (Jordan Calloway) is a completely unneeded aspect of the film but Calloway is the most likable character that isn’t portrayed for comedy relief. Father John (P.J. Byrne) and phone repairman Derek (Tom Segura) are the highlight of the film in their comedy relief roles with Byrne giving an appreciated original portrayal of a nerdy priest and Segura creating my favorite character in the film. Further casting of Peter Facinelli, young Talitha Eliana Bateman, Tichina Arnold and Anne Winters round out a very good cast. Off screen deaths miss the mark by two seconds of having that little extra to make this movie live up to the countdown.