Review of "Rattlesnake” by The Headless Critic 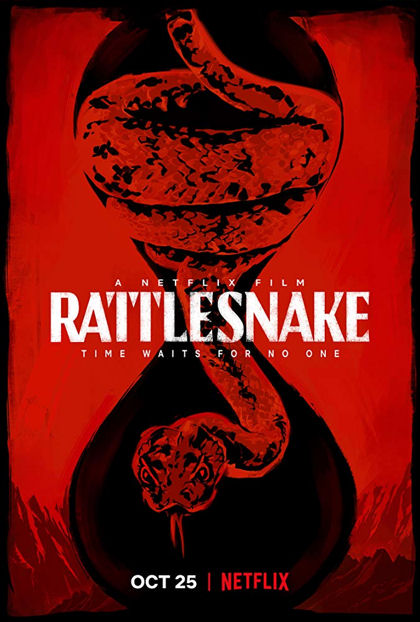 On a road trip a single mother Katrina Ridgeway (Carmen Ejogo) stops her car in the middle of the desert with nothing around for miles to let her little girl Clara (Apollonia Pratt) turn the desert sand into her litter box. A rattlesnake bite sends a mom into panic and she rushes her baby girl to a nearby trailer she somehow didn’t see before. When the dweller of the house offers to help her baby girl, Katrina finds out the price to pay for life is life itself. Given just one day to save her daughter’s life once again a frantic mother searches for someone to kill before her daughter dies.

The director of the Netflix made film adaptation of Stephen King's 1922 which was one of my favorite films of 2017, follows his version of a King tale with a movie written on his own in Rattlesnake. Zak Hilditch creates a dire situation immediately in the film sending a worried mother on a hectic search for help. As time runs out acceptance of her situation and finally action sends her looking for someone worthy of being killed in order to save her daughter's life. Rattlesnake has a good concept of selling your soul to the devil or in this case, selling your daughters soul while trying to save her life. It’s a realistic, modern day approach to the age old tale.

The film relies heavily on Carmen Ejogo’s lead role with perhaps Theo Rossi being second on screen in a supporting role that’s evenly distributed throughout the rest of the cast. With a title that would make you think it’s an action movie with a little more bite, in a mother’s rush the film does get a little lost in a Die Hard with a Vengeance trek across town. My one complaint about 1922 is the elongated storytelling of a novella that drags a little. Without the writing of Stephen King to keep them centered, Rattlesnake drifts with Kristina’s search for answers almost getting lost in the desert. Still entertaining the classic tale seems better fitted for an hour episode than a feature.