Review of "The Boy” by The Headless Critic 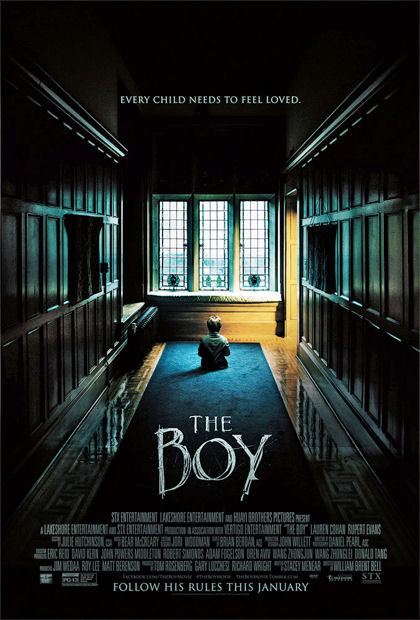 Rule number one, No Guests. The Heelshire family had a number of potential nannies come through. Rule number two, Never Leave Brahms Alone. Greta Evans (Lauren Cohan) is the one they feel who can best manage their son Brahms. Rule three, Save Meals in Freezer. Greta has been hired to care for a doll that Mr. Heelshire (Jim Norton) and Mrs. Heelshire (Diana Hardcastle) treat as their own child. Rule four, Never Cover Brahms Face. Brahms is a replacement for the son they lost some twenty years ago. Rule five, Read a Bedtime Story. Brahms has rules for the house. Obey Brahms rules and all will be well. Rule six, Play Loud Music. Disobey Brahms rules and things will not be okay… Rule seven, Clean the Traps. Every child needs to feel loved, even the ones who aren’t real boys. Rule eight, Only Malcolm (Rupert Evans) Brings Deliveries. Brahms doesn’t like everyone. Not everyone is allowed in his house. Rule nine, Brahms is Never to Leave. This is his house! Rule ten, Kiss Goodnight. To be Brahms' nanny you must follow the rules whether Mr. and Mrs. Heelshire are watching or not. Maybe Brahms let his new nanny stay, maybe…

After teaming with Matthew Peterman for three films director William Brent Bell teams with first time feature film writer Stacey Menear for both of their debut wide theatrically released film. The Boy is an original concept that somehow still seems very familiar of a nanny being hired to care for a doll as if it’s alive. Tension is creatively built in the true nature of Brahms. Is Greta going crazy or is there something more to Brahms than his porcelain face and stuffed body. Are the increasingly unexplained events that are happening supernatural or just yet to be explained.

From the Heelshire manor to the Heelshire’s themselves, average girl Greta steps out of her element into an upper society world that’s isolated from everyday existence. It’s a suspenseful journey that builds to a big reveal. Out of nowhere is the night and somewhat similar to the original 1980 Friday the 13th the killer reveal is a character that comes out of nowhere. The twist ending falls flat coming out of nowhere in what is otherwise a nice suspense thriller.