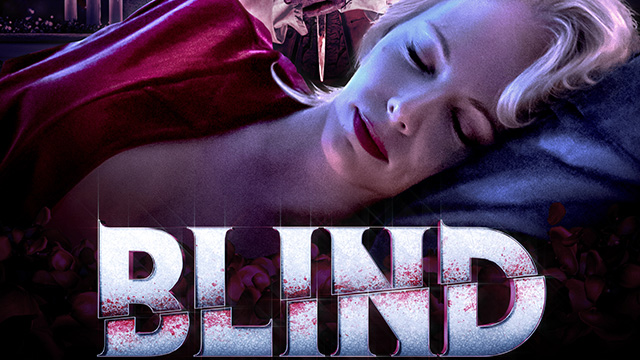 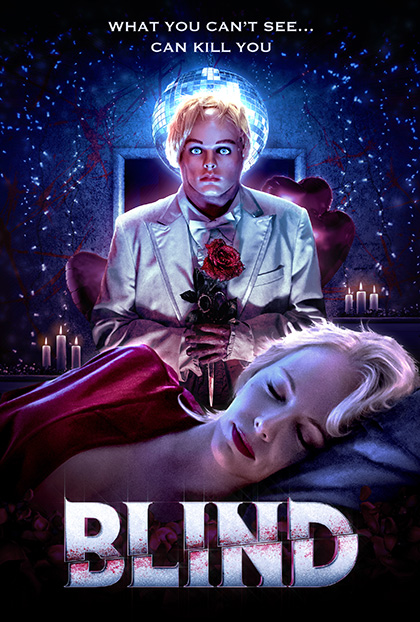 Actress Faye Dayne had it all until laser surgery meant to correct her vision robbed her of it completely. Struggling to navigate a physical world and psyche both equally darkened, her efforts to adjust become more challenged as a masked killer shadows her obsessively.

“Blind” is the latest horror thriller from Marcel Walz, director of the 2016 remake of “Blood Feast,” working from a script by writer Joe Knetter. It’s a great-looking film, overall well-made and acted, but which, in the end, may leave many audiences with unfulfilled expectations.

Sarah French is Faye, a beautiful, up-and-coming actress who believes her career, and much of her life, has ended due to her botched surgery. Her best friend Sophia (scream-queen Caroline Williams) blind herself, knows that disability brings challenges to life, but not finality, and encourages Faye to move forward. Sophia even attempts to spark a relationship between Faye and Luke (Tyler Gallant), the counselor who heads up weekly sessions for the sight-impaired. Though not blind himself, Luke is mute, speaking through a voice-simulator app on his phone. Shy and sensitive, he is smitten with Faye but thinks the former movie star is out of his league. Expressing far more aggressive interest is “Pretty Boy” (Jed Rowen), Faye’s homicidal stalker. Hulking, his face hidden by an expressionless mannequin-like mask, he has eye-obsessions of his own, repeatedly mutilating a single eye of both his dolls and victims.

Our three leads are all actors Walz has worked with previously, and that comfort and familiarity with his cast work in the pictures favor. French does a great job as Faye, giving us a woman who once basked in her success but who now believes she has lost almost everything. Her character is tragic, perhaps a bit self-pitying, but never so absorbed that we aren’t rooting for her. She’s lovely and charismatic, and a TV interview flashback illustrates the woman before contrasted with the one today. Spunky, cheeky, and upbeat, the always welcome Caroline Williams is excellent as Sophia. She’s a performer who audiences don’t see enough of, having developed a cross between Dee Wallace and Mary-Woronov, but in shit-kicker cowboy boots, quality over her career. Gallant is decent as Luke if perhaps playing the role a bit too meekly at times. But he’s an appealing actor and does a good job conveying the emotion lacking in his computer-speak communication. Jed Rowan is fine as our hulking killer, though the film doesn’t require a tremendous amount from him. The supporting cast is solid as well (with possibly one of the most real-world police officers ever put to film), and there’s a brief grumpy cameo from “Greasy Strangler” Michael St. Michael’s as one of the therapy group’s members.

As mentioned above, “Blind” is a film with great cinematography, compositions, and production design. Parts are quite visually elegant and lovely, and the expressionless closeups of Pretty Boy’s “face” are hauntingly creepy. Ironic for a film about the sightless, but true nevertheless. But for a movie from the director of “Blood Feast,” the killings are both few and not overly gory. Perhaps, it’s not a bad thing since the tensions are still there, but a surprise nonetheless.

The problems seem to lay elsewhere. First is a woefully squandered (and even anticipated) opportunity for the killer to toy with the blind Faye by impersonating the mute Luke’s voice-simulator. It’s a potentially taut bit of business the filmmaker’s completely missed utilizing. The dialogue is well-written overall, but with a tendency for characters to over-monologize. Not to make any sort of “sight” pun, but it’s better to be shown in cinema than to be told, which means that actions should precede explanation. Toward the conclusion, Faye gives a speech lasting too long, asking too much of French (or any actor). But “Blind’s” real let-down and the thing that will divide audiences the most is its finale. We’re left with dozens of unanswered questions and unfollowed concepts in a film that is otherwise quite enjoyable.

Are Walz and Knetter planning for a sequel? Were they hoping to position Pretty Boy in the canon of slasher greats, alongside Jason, Freddy, and Leatherface? If so, they may have forgotten that this is something for horror fans to decide, and as a result, they may have short-changed the audience of “Blind” more than just a bit.