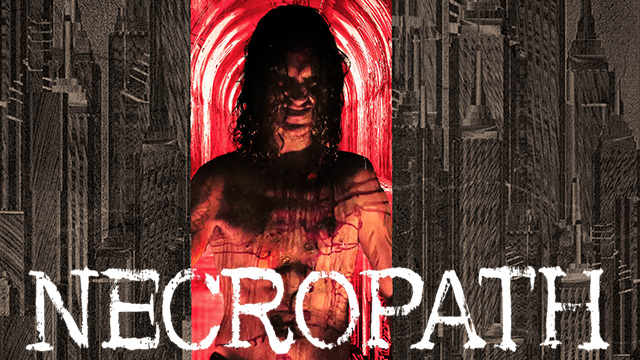 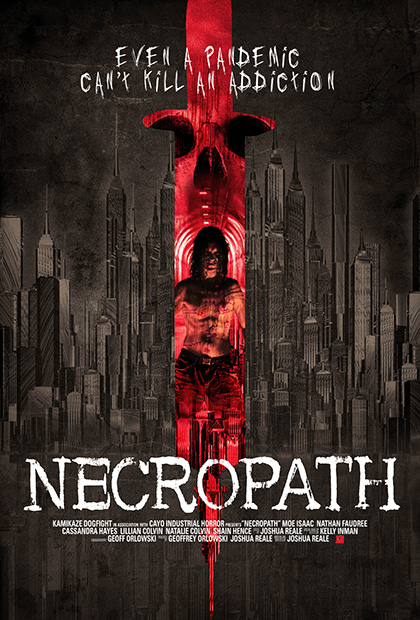 Set in a world already besieged by decay, filth, and violence, “Necropath” leads us through a city as it grapples with the onset of a viral zombie plague. Our guide through this hellscape is Scag, a heroin-addicted scarecrow so consumed with his addiction to drugs, money, and violence that his body and mind shut most everything else out; he is seemingly impervious to bullets, plague infection, and even death.

“Nercopath” is an ugly, assaultive, and surreal journey that tells, not so much a story, but a hallucinogenic fever-dream of a world where the rules of humanity have been stripped away. The melding of three shorter films by Upstate haunt operator Joshua Reale, the film utilizes that industrial location as its setting. Dark and filth-strewn, it is not a place one would want to find themselves after dark, as the film’s characters discover.

The movie’s first half follows a young boy, his mother, and a well-meaning cop as they fend off attacks first from zombies and then from the addled Scag. Its second half concerns a family of four, including a young girl and her infant sibling. Like their filmic predecessors, they, too, wander too far off the lighted path. Adding to their terrors is a maddened, grotesque crack hag who is obsessed with the small infant. As she and Scag terrorize the young girl, they squabble violently with each other amidst the chaos and clamor of their surroundings.

Nearly dialogue-free, “Necropath” is less concerned with creating a narrative and more concerned with thrusting us into a mindset. Its visuals are indistinct and murky. Rarely is anything sharp or clearly lit. Instead, the camera lens’s focus meanders constantly, and the lighting, when there, flickers and strobes (this is not a film for people with epilepsy). Shadows are blacker than black, and highlights are dim at best. Whether the cinematography is a wholly deliberate choice or the result of budgetary and equipment issues doesn’t matter. The effect works beautifully to convey the film’s nightmarish milieu. Even the occasional rolling banding evident from shooting with LED lighting contributes to the look in a suitable manner.

Likewise, the film’s sound design constantly throws us (and Scag) off guard. Brash and endlessly assaultive, it’s filled with screeches, wails, claxons, and an ever-repeating air raid siren. The credits fail to list a sound designer, but whoever is responsible deserves recognition for their contribution to the film’s dreadful atmosphere. It’s just enough to put us on edge throughout, but not too much to make the movie unwatchable.

Many of the performances seem oddly disaffected, particularly from the two children. This is a world long broken, it seems. And for these children, the horrors that surround them are just an escalation of an already unpleasant society. Like the cinematography of the film, it’s difficult to tell if these performances were completely intentional. It seems as if they are, and they add yet another layer to the off-kilter mood that permeates the film.

In opposition to that approach, Natalie Colvin as the hag is 100% invested in her character. Gravel voiced, filth-covered, and with madly glittering eyes, she is both disgusting and terrifying as she shambles about, endlessly croaking, “The baby…” And if Colvin gives that percentage, then Moe Isaac doubles down on that as Scag. Scabied, and scared with track marks, thin to the point of near-frailty and toothless, he is utterly convincing. It is a powerhouse, fearless performance as a figure who long ago left humanity and yet refuses to succumb to mortality. He is the empty, angry, black soul of “Necropath.”