"One of the toughest and most powerful films from Korea.

A must-see film for anyone brave enough." - BeyondHollywood.com

A Serbian Film Removed From Netflix

The controversial film "A Serbian Film" was removed as a rental from Netflix. They also do not stream the movie, it's been totally removed from the website.

Vamped" Out is a weekly series taken from a documentary by award-winning filmmaker Elliot Finke (Pollak). During the spring and summer of 2009, Elliot shot what he believed was the first documentary of an actual vampire. While in postproduction, he went missing. The series follows a modern day 35-year-old struggling actor/Vampire (Antoon) trying to make a living in Los Angeles. Pollak follows the Vampire as he continuously gets rejected for the role he was literally born to play.

Visit "Vamped Out" on Babelgum at: http://www.babelgum.com/vampedout

SURVIVAL OF THE DEAD premieres on VOD, Amazon, Xbox Live and Playstation April 30 and in theaters on May 28th .
Official Facebook
Official Website

Survival Of The Dead Fangoria Cover

SURVIVAL OF THE DEAD premieres on VOD, Amazon and Xbox Live April 30 and in theaters on May 28th . 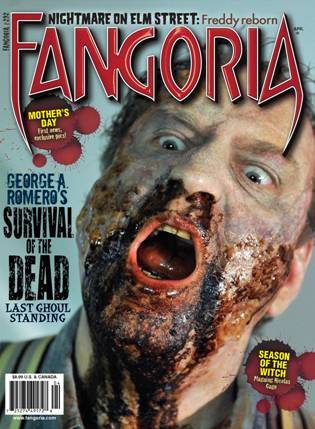 Visit http://tunnelratsmovie.com/ for more information on the film.

ON BLU-RAY™ AND DVD AUGUST 4

The Last Templar Coming to DVD

The Mutant Chronicles Available On VOD

Read all the news and details about the DVD and Blu Ray and how to win 2 FREE DVD copies, along with exclusive photos from the movie. Also be sure to check out Official Death Race Website !!!

LET THE RIGHT ONE IN

85 items in this category.
Showing 20 items per page.